I honestly do not know what to make of this, of anything in fact now connected with my search for Emma Fielding. I can only hope that my continuous recording of such strange, such unfathomable events will mean that I, or someone – god knows if it will ever be me – will be able to make sense of all that has happened.

The package I collected from the secondhand bookstore did indeed contain a book, which means that the cryptic message left for me by ‘Giles Tester’ proved accurate in that respect at least. In all other respects, I confess, I am truly confounded. Because I now have in my possession a book titled After Her Blood that has my name on it as author. These facts are not in doubt, even though the book’s pages, front cover and spine are so torn and battered about – and have subsequently been very poorly put back together again with black electrical tape – that much is obscured and the book itself appears to be far older than its eight years (its publication date is 2010); in truth it looks as if it has survived a war! (See the photographs accompanying this post). 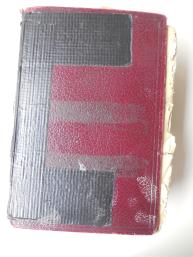 For the past few weeks, since opening the pages of the book, I have considered all manner of possible solutions to this latest puzzle, but for now at least the sense and the truth of it eludes me. This much at least I can say: the book is without a doubt connected to the case, and maybe even to the disappearance of Emma Fielding, but in a way that I cannot yet comprehend; and I know for certain that I did not write this book.
More insightful readers might propose a simple solution to this puzzle, namely that another person called Jo Delgardi was or is its author, and that the same name is the only connection we have in common. While this could be the case (certainly on the surface, without delving deeper into the issue), only the briefest of reads would immediately make clear that the book’s central character is also the same – Dr Emma Fielding, who has a son called Lucas and a husband named Julian. What is even more perplexing, beyond the realms certainly of mere coincidence, is that some of the same people outside of Emma Fielding’s immediate family are also mentioned and included in its pages (Patrick Black is one, DCI Jeffery, another). More strange still, one or two sections of the book appear to be almost word for word the same as those in the pages of Incomer, the main contributor of which was Emma Fielding herself and which (for the record) was published in 2017. 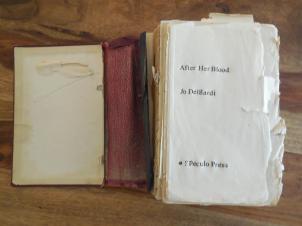 Could this mean that Emma Fielding at some point wrote the same or similar sections of both books – that is, eight or more years ago and more recently? Have I in fact been the victim of some elaborate scam? These would be obvious and reasonable questions to any sensible pursuer of the truth. As to the latter I cannot in truth contest this, but with regards to the former it is difficult to see how this can be the case as most of the events recorded and later published in the pages of Incomer, were written during therapy sessions by Emma Fielding herself (I know this, I was there), and had not happened until that point – that is, not before she began therapy sessions with me in August 2015, and thereafter until her disappearance.

Currently, my disconcertion over this latest development in Emma Fielding’s case (I have so many questions: why was I sent to collect the book, and by who? How is it connected to what happened to Emma Fielding? And so many more), has for now at least eclipsed my pursuit of the answer to Emma’s disappearance, although the book itself may yet prove the catalyst to the truth about that (I can at least hope). In which case, I am now focusing all my energies on re reading and scrutinising the book that I did not write in my search for clues. I have not yet reached the end following my initial hasty perusal of its pages and so this is my task for now. In the meantime, and in my very next post, I intend to reproduce some of the contents of the book, word for word, in the hope that someone, anyone – perhaps even myself? – may be able to make some sense of it, and the strange and disturbing scenes that it sets before the reader.

Use the Right Hand Side Bar For Latest Posts

You can search for specific posts and see all the updates on Emma Fielding below.